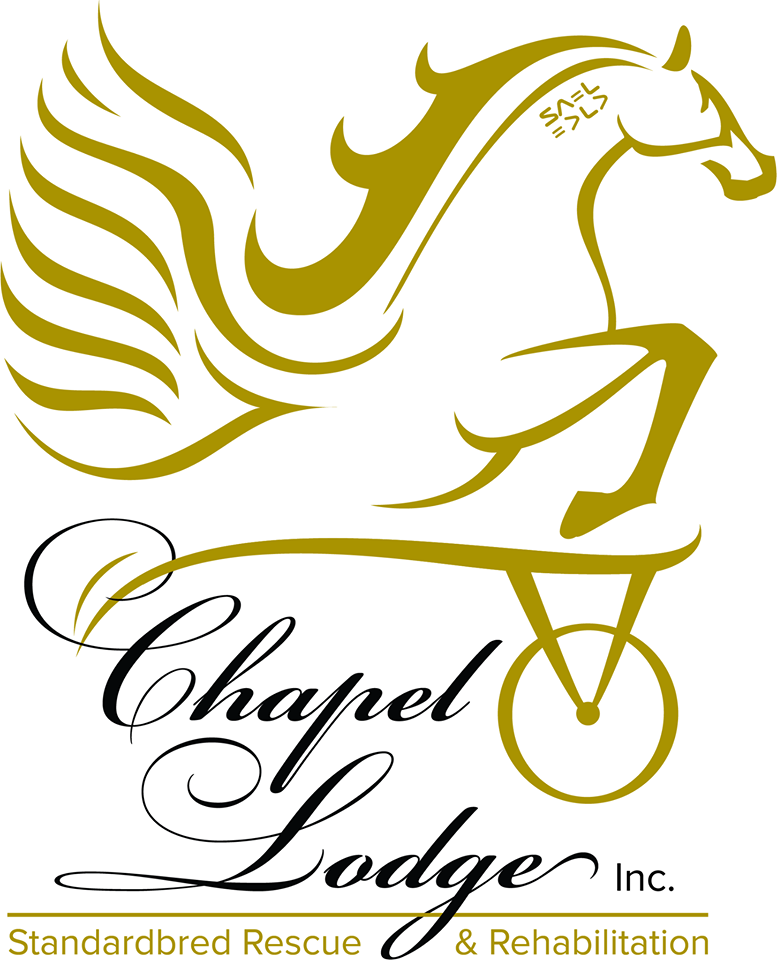 Click on the Donate now button above to donate through My Giving Circle and support A Life After Racing for CLSR&R horses.

Below are some of the horses we have rescued and taken into our care over the years and here are their stories.

Chance arrived at Chapel Lodge on the 18th April 2015.

We received a phone call from a friend of the charity who informed us of two horses that needed rescuing and were in very poor condition not too far from us. One being a little pony and the other a standardbred gelding. Without a second thought, we hocked up the float and went and picked up the gelding. His owner had surrendered him to their agistment owner who unfortunately could not keep him.

Upon picking the up gelding, it became evident of his poor condition and health. The agistment owner didn't even know his name. He knew that he had been ridden by his previous owner, although he had never seen the current owner ride him.

That day, the malnourished gelding came into the love and care of Chapel Lodge and a facebook post was started to find him an appropriate name. Some wonderful names were suggested, but when the name Chance was suggested, it just stuck with this gorgeous boy. As he really did deserve a second chance at life.

Chance started on a light, moderated diet to slowly re-introduce regular feeds into his system. He was wormed and teeth filed and vet checked.

Over time, Chance slowly started to gain weight. His loving, kind nature remained the same all throughout his health improving. A true, gentle soul.

Chance is now in full healthy condition and is ready to be started in some light work to build top line and then be assessed under saddle.

Chance will only be available to the BEST of home who will promise never to be his Forever Home.

Photos are from the day Chance arrived to October 2015

Initially Doc was offered to Chapel Lodge, as a show quality gelding and we were provided with a photo of him in hand at a show in immaculate condition. We recalled seeing him in the flesh at this show and were excited at the prospect of obtaining such a stunning horse. However, upon collection of Doc, it was obvious that he was not in the same condition as the photo had promised him to be. He was almost to the point of emaciation. All of his ribs were showing and hips protruding, even before we took his rug off to load him onto the float, we could see he was in very poor health. The day Doc came to live at Chapel Lodge was the day his life began its change.

At first Doc didn’t trust anyone and we quickly became wary of his hind legs, but after time and much devotion, he came to trust us to handle him and treat him. As Doc’s condition started to improve, his health took a very sudden turn with a very nasty bout of Colic. The poor boy had a massive amount of sand in his gut that had started moving with new feed and exercise being slowly introduced. Thanks to the wonderful team at Adelaide Plains Equine Clinic he pulled through, but that turn was the first of many more bouts of colic, many sleepless nights running him around the round area and the end result being a VERY large vet bill.

Almost a year later, Doc seemed to be clear of his Colic turns and he stared putting on some true weight. He became so fat in fact that some people who didn’t realise he was a gelding asked when he was due to foal?

Doc is now in perfect health, he has been clear of colic for well over a year and he has been started in some light ground work, ready to be backed to become a riding horse.

Throughout the time Doc has been with us, he has proved to be a real character and is well loved at Chapel Lodge. He has a real cheeky, in your face personality and has a massive floating trot. When the right forever home comes along for this amazing boy, he will definitely not disappoint.

Below are a few of Docs progress photos. We sadly did not get a photo from the day he arrived

Doc will be available for adoption at completion of his training.

SOLD January 2017 to an amazing home with Heidi and along with his best paddock buddy, Rosie. Thank you Heidi we couldn't have asked for more.

The "Old Man" as he affectionately became known to us was found wandering the streets of Lewiston late December 2012.

Many people had nick named him the "Ghost Horse" as he used to be seen and then not, living amongst an olive grove down the road from Chapel Lodge.

The day he arrived at Chapel Lodge he broke all of our hearts - never had we seen a horse in such poor condition. He was so incredibly skinny, with a shaggy coat as long as you can imagine, with severely and tightly matted hair over the backside and underside of his belly, across and over his flanks. He could barely walk due to the matting and the pulling of the matts on his skin. And his feet... all four feet were in such poor condition, all having abscesses in them, one of which had an abscess that went from the top of his coronet band the entire way through his hoof and out through the sole. The mere fact that he was still walking was a miracle.

The following days we started on his beauty treatment. We gave him a bath and started to clip him. He happily allowed us to clip all over his face, neck and shoulders. However, as soon as we got to those tight matts over his flanks and belly he showed us he was very tender in these areas and did not want us to touch him there. Over the month with lots of careful brushing and snipping with the scissors we were finally able to relieve him of his nasty matted coat. His feet slowly started coming back into shape after numerous more abscesses and his teeth were filed down to allow him to eat properly. Oddly enough his worm count was "0" - says something for living on a diet of Olives - Lol!

The "Old Man" was a real character - as he grew to trust us, his personality came out. He LOVED his food and he'd call and nicker as soon as he saw you, either for food or just to get some attention or cuddles.

One of our volunteers who was initially petrified of horses overcame her fear of them through his beautiful, trusting soul.

He loved going for walks around the property and visiting the other horses. He was always in good spirits.

We hunted high and low to try and find his owner to no avail. He was branded, but neither could we find any stud brands to match.

Then tragedy struck. On Wednesday 19th March 2013, as always Kerry took her kids to school and the "Old Man" stood at the gate looking and nickering at her as she drove out the driveway. Upon her return she found him sleeping peacefully by his gate. He was gone. It was a heartbreaking day for everyone involved as he had made such an impact on all of our lives.

Still to this day we do not really know what happened - we suspect a stroke or an aneurism. But we find peace knowing that the last four months of his life were spent in utter happiness and that we impacted his life for the better as he impacted ours.

Rest In Peace "Old man" we will never forget you